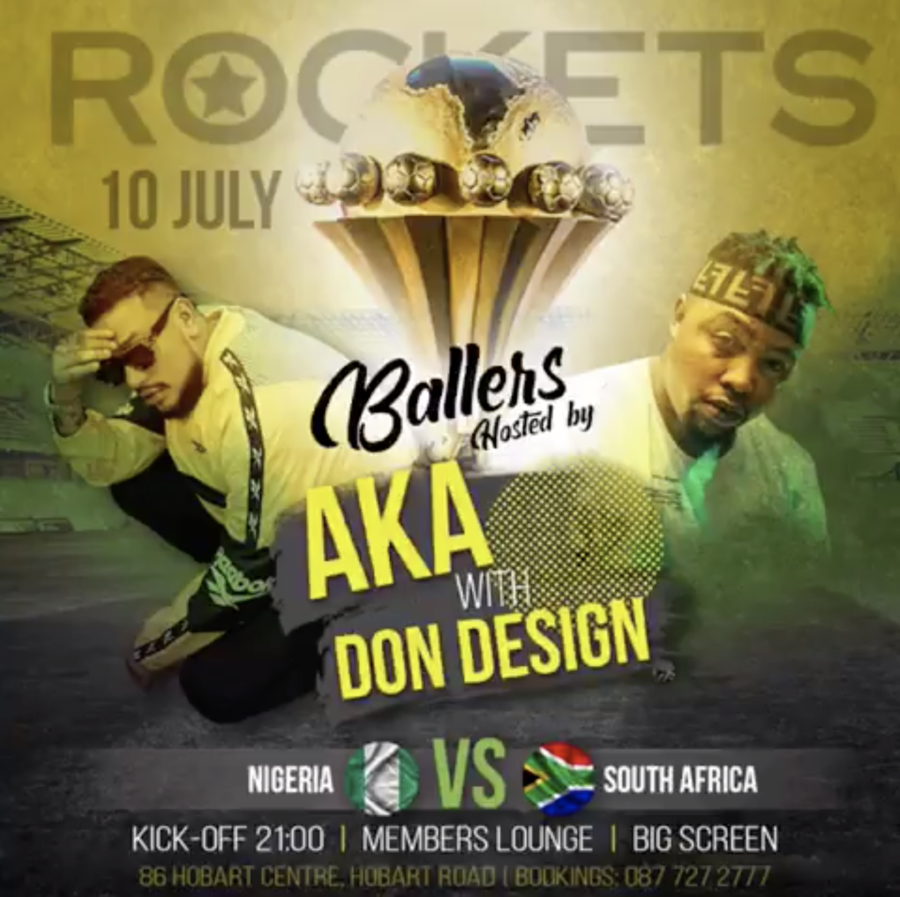 AKA and Don Design will be hosting a Ballers screening event at Rockets for the AFCON quarter-finals match between Nigeria and South Africa.

South African rapper AKA took to social media on Tuesday, 9 July 2019, to invite fans and soccer lovers with deep pockets to an event that he will be hosting at Rockets in Bryanston. AKA’s game screening event will take place on Wednesday, 10 July 2019. The course of the Ballers event is to show support to South Africa’s national soccer team, Bafana Bafana, in their match against Nigerian soccer team, Super Eagles, in an AFCON match. Those attending will watch the match live from a big screen in the ‘members’ lounge’.

AKA wrote said that he is willing to put some of his own share of money towards the event, insinuating that he firmly believes that Bafana Bafana is capable of winning the match. He advised on the post for those interested to book early as the bets keep going up. The South African soccer team made headlines when they won their last match against Egypt on Saturday, 6 July 2019. The win came when all odds seemed to be against them due to losing several earlier matches.

AKA posted a video on his social media pages of him illustrating how Bafana Bafana will win the game against the Nigerian team. In the video, AKA is seen playing soccer with an opponent on a small soccer field, with him representing the Bafana Bafana soccer team.  Moving the ball a number of times between his feet to move past his opponent, he manages to get through when the opponent falls to the ground in defeat.

This is how BAFANA 🇿🇦 BAFANA doing NIGERIA 🇳🇬 tomorrow! Join us at Rockets Bryanston as we back the boyz. pic.twitter.com/ahgMSqeAQv