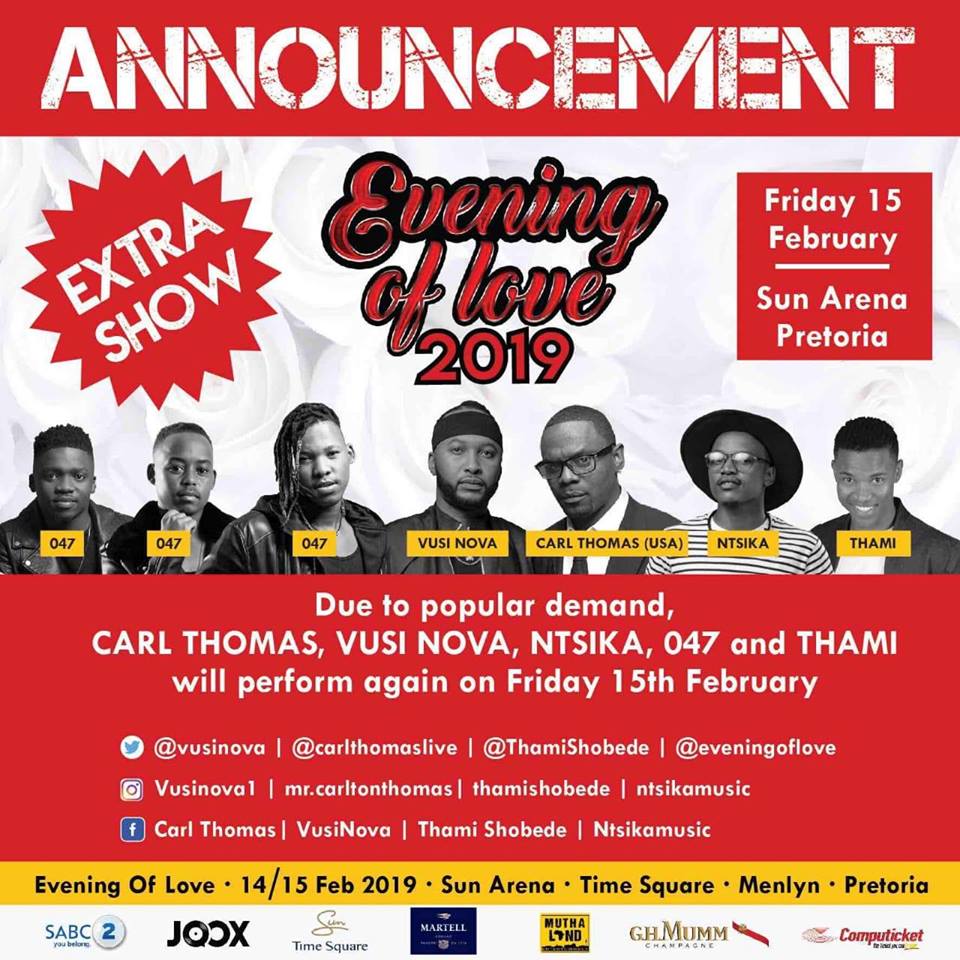 The star will be performing alongside Ntsika, 047, Kelly Khumalo and American RnB artist Carl Thomas at the Valentine’s Day celebration at the Sun Arena in Menlyn, Pretoria.

Afro pop star Vusi Nova announced in a Facebook post on Sunday, 3 February 2019 that there would be a second Evening Of Love performance.

The first show will take place on Valentine’s Day, Thursday, 14 February 2019 at the Sun Arena, in Menlyn Pretoria. The event will feature performances from Vusi Nova, Ntsika, 047 and American RnB artist Carl Thomas. The second show will take place on Friday, 15 February 2019. Vusi Nova, whose real name is Vusi Nongxa, said on Thursday, 31 January 2019 that his creative collaborator Kelly Khumalo would also be performing at the Evening Of Love event.

The singer shared a short clip of the song Zungandithembi, which features Khumalo and is part of his latest album titled Manyan-Nyan. The pair took to Instagram on Thursday, 24 January 2019, she and fellow vocalist, Vusi Nova, shared regal photographs on Instagram and captioned the images with messages alluding to a possible collaboration. They each posted a different photo from the same shoot.

Vusi Nova also announced on Thursday, 31 January 2019 that there would be a singing competition to find someone to join the Evening Of Love line-up. The winner will also take home R10 000 in prize money. All three auditions would be held at a McDonald’s outlet in Johannesburg and Pretoria. The first Johannesburg audition took place at the McDonald’s at Newtown Junction on Saturday, 2 February 2019.

The next Johannesburg audition will take place at the Soweto Theatre on Friday, 8 February 2019 at 2pm. The Pretoria audition will take place in Sunnyside on Saturday, 9 February 2019 at 1pm. Vusi Nova also said he would be giving fans a chance to win VIP tickets to the show and would share the details on his Facebook page. Tickets are available for purchase at Computicket, retailing between R250 and R1850.