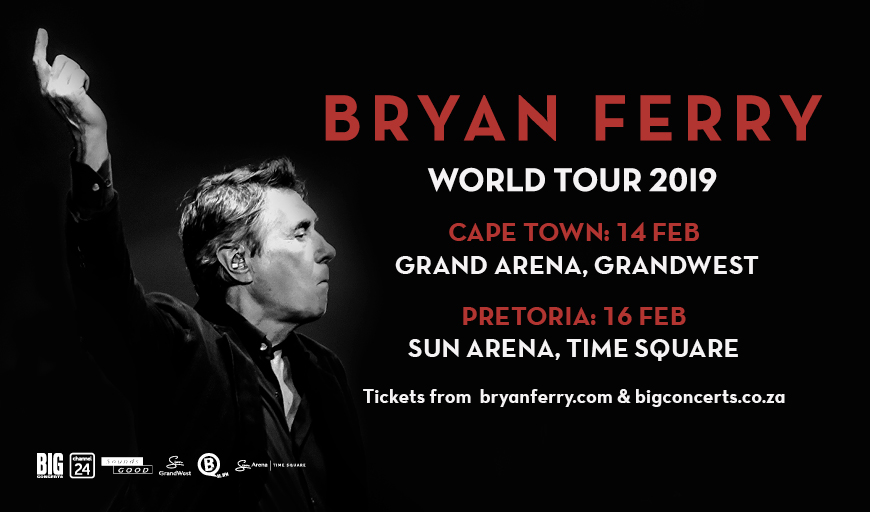 English singer-songwriter Bryan Ferry is set to perform at the Sun Arena, in Times Square, Pretoria, on Saturday, 16 February 2019.

International musician Bryan Ferry is known for his leading vocals in the glam-rock band Roxy Music, in the early 70s and 80s. The band is wildly known for their three number one albums and ten singles, which reached the top ten in the United Kingdom during those decades. Their popular songs Love Is The Drug, Dance Away and Angel Eyes, are recognized by many.

Ferry simultaneously started his solo career in 1973, earning musical credibility in his own right. His solo hits A Hard Rain’s a-Gonna Fall, Let’s Stick Together and This is Tomorrow are all songs expected to be performed by the legendary musician.

2019 sees Bryan Ferry being inducted into the Rock and Roll Hall of Fame as a member of Roxy Music, solidifying his rock star status.

The musician is known for his rare distinction for being regarded as both classic and contemporary, which is an accomplishment achieved in both his solo career and his involvement in Roxy Music.

Cape Town audiences were treated to his live performance on Valentine’s Day, 14 February 2019, where Ferry kicked off his two-show South African tour.

Bryan Ferry is set to perform at the Sun Arena, in Times Square, Pretoria, on Saturday, 16 February 2019.

Tickets for the show are available on Big Concerts.