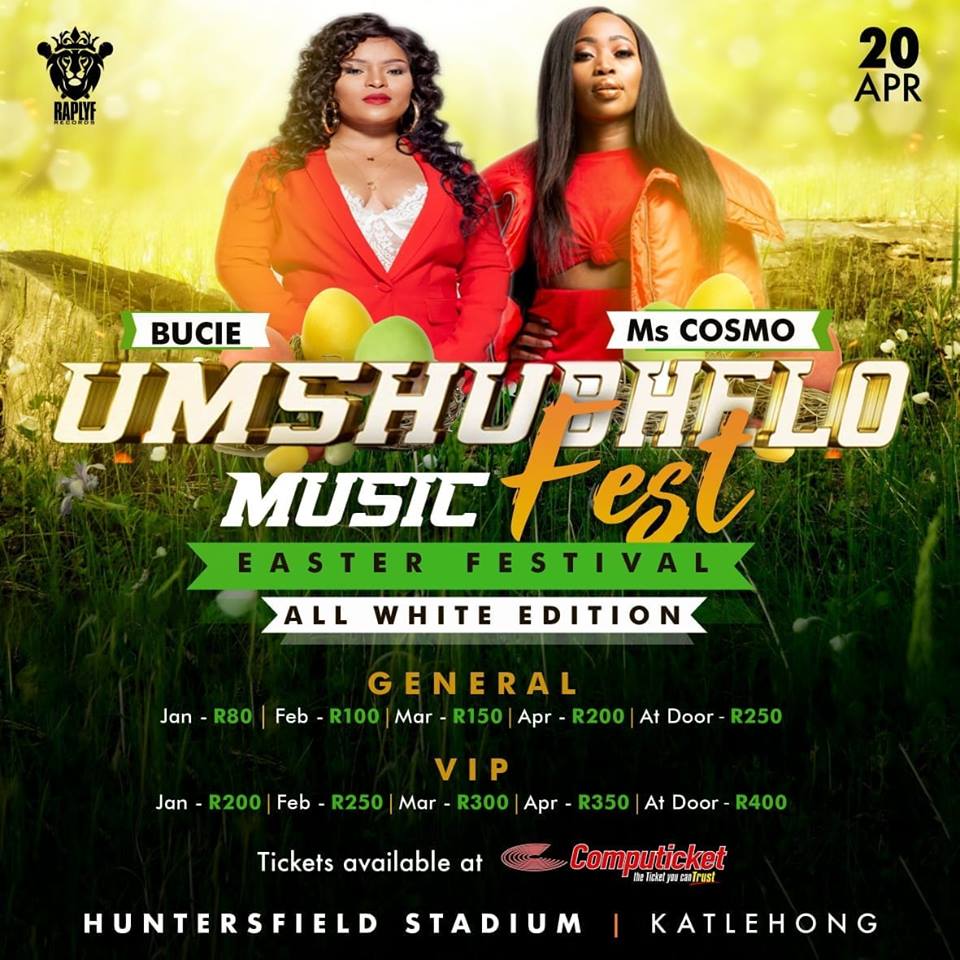 The pair are two of the many musicians who have already been confirmed as performers for the fourth edition of the Umshubhelo Fest set to take place in Katlehong  in April 2019.

Rapper, Kwesta, announced on Facebook on Tuesday, 29 January 2019, that RnB house singer, Bucie and DJ, Ms Cosmo, will be performing at the Umshubhelo Fest in April 2019.

The two musicians are the seventh pair to be confirmed for the event, since the rapper announced Prince Kaybee and Busiswa as performers on Monday, 21 January 2019. So far, artists Cassper Nyovest, AKA, Riky Rick, DJ Shimza, Mobi Dixon, Major League DJz, Simmy, Sho Madjozi, DJ Tira and Dladla Mshunqisi have all been announced as performers.

This is the fourth edition of the Umshubhelo Fest which brings together some of the country’s best musical talent on one stage. The third edition of the Umshubhelo Fest was hosted on the Day of Reconciliation in December 2018. The event is organised by Kwesta and Kid X’s Raplyf Records and this edition is in celebration of the Easter holiday. The event will take place at the Huntersfield Stadium in Katlehong on Saturday, 20 April 2019.

New additions, Bucie and Ms Cosmo, are extremely popular on the South African music scene. Bucie has had an exciting career so far, since bursting onto the scene in 2007 with her mega-hit second single, Turn Me On, featuring superstar house DJ Black Coffee. The collaboration launched her into stardom. The pair collaborated once more in 2009 on the hit song, Superman.

Fellow artist, Ms Cosmo, is one of South Africa’s most well-known hip-hop DJs. She is responsible for the mega-hit single titled, Ay Baby featuring Rouge, Moozlie and Sho Madjozi released in 2017. Ms Cosmo’s most recent release is the single titled, 88, featuring Kwesta, Solo and Kid X.

Tickets for the Umshubhelo Fest are being sold in five different phases. The first phase of tickets are on sale in the month of January 2019. Tickets are available for purchase from Computicket, retailing between R80 and R200. The star urged fans to buy their tickets as soon as possible as the time to buy phase one tickets is almost up.