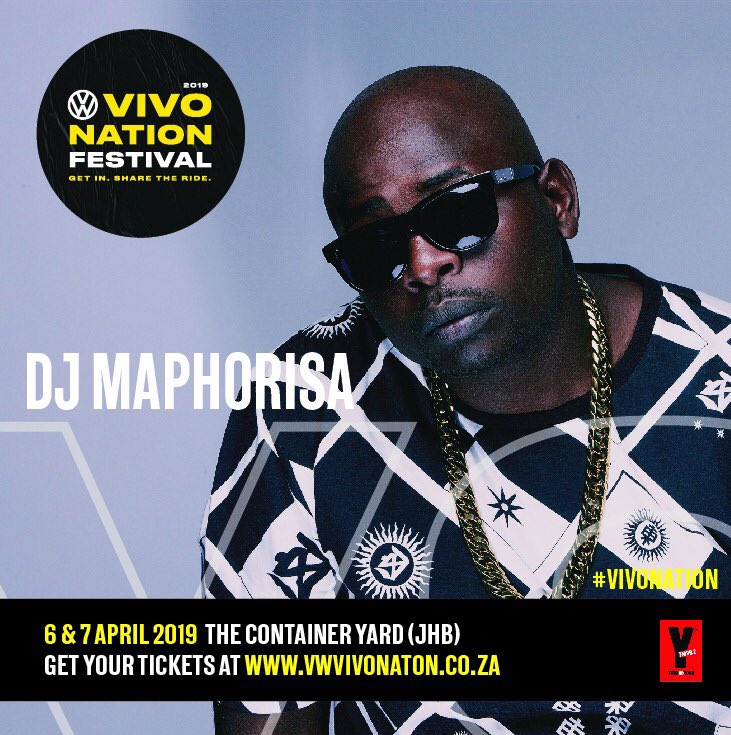 Gqom hit-maker DJ Maphorisa will be a part of the second annual VIVONation Festival on the 6th and 7th of April 2019.

DJ Maphorisa is the self-proclaimed ‘Lord Of The Hits’, and has lived up to the title. He will be representing the gqom genre alongside Xitsonga rapper Sho Madjozi at the VIVONation Festival, which will be held on the Saturday, 6 April 2019 and Sunday, 7 April 2019 at the Container Yard in Impex Avenue, downtown Johannesburg. This is the second annual edition of the festival.

DJ Maphorisa shot to public fame for his work on Drake’s 2016 hit One Dance. Before that, he was a highly respected behind-the-scenes producer, his collaboration with Drake came about through his work and friendship with African superstar and rapper, WizKid.

DJ Maphorisa has worked with some of the best South African talents and has cemented his name locally with hits like iWalk ye Para featuring Moonchild Sanelly, K.O and Zulu Mkhatini and Midnight Starring featuring Busiswa, DJ Tira and Moonchild Sanelly.

First held in 2018, Vivo Nation has over 100 containers moved around to create a bespoke ambiance with music, food, and a chance to drive a Volkswagen around. This year’s headlining artists are rappers Shane Eagle, AKA and Rouge, vocalists Busisiwa, Mlindo The Vocalist and Sjava, along with deejays Zan-D, DJ Simmy and DJ Kent.