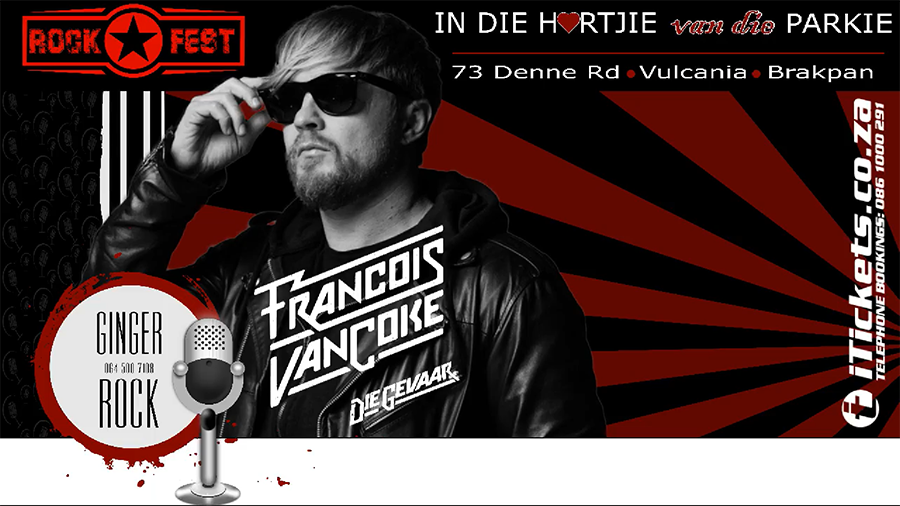 ‘In die Haardjie van die parkie’ directly translates to ‘In the heart of the Park’. This is indicative of the type of atmosphere festival goers of Rock Fest should expect on Wednesday, 27 April 2019.

The venue, Cruise Inn, is located on 73 Denne Road in an area called Vulcania in Brakpan.

A local South African company called Ginger Rock is hosting Rock Fest. The Ginger Rock team has previously hosted numerous events throughout South Africa, with the recent 2019 Beer Bash hosted in Pretoria and an event with local superstar Jack Parow being hosted by the company in KwaZulu-Natal in 2018.

The main attraction, apart from the venue and hosts, will be Francois van Coke, who is a local staple of the South African music scene.

Francois was previously known as the lead singer of the well-renowned Afrikaans rock band Fokofpolisiekar. In early 2015, Francois launched his debut solo album and a harmonic ballad with local female artist Karen Zoid.

Rock Fest has an exciting supporting act line-up which will be announced closer to the time of the event. Tickets will be available for purchase on itickets.co.za retailing at R130 for general standing.