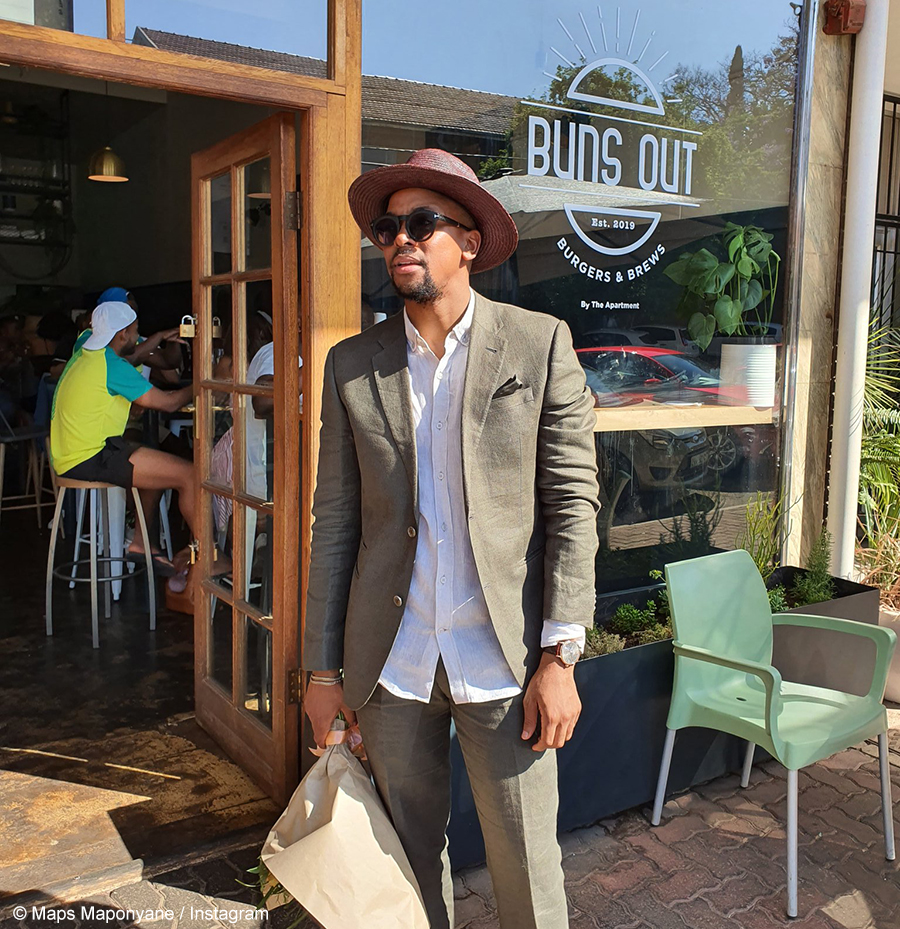 The social media romance between Maps Maponyane and Pamela Mtanga, known as Mrs Buns, escalated this past weekend when the “couple” made it official by “getting married.”

On Sunday, 3 November 2019, social media user and fan of Maps Maponyane, Pamela Mtanga, finally received her fairy tale ending when she and Maps got “married” in front of a congregation at his Linden burger establishment, Buns Out.

The flirtation between the two started on social media after an image of Pamela was photoshopped with Maps’, with the caption, “The Bunses look so good and happy together, I love how Mr Buns looks at Mrs Buns. I love the matching outfits, they are so well put together, wow guys.” Pamela ran with the social media romance until Maps responded to the posts.

Social media users then photoshopped Maps and Pamela’s faces on Donald’s Mina Nawe promotional images after Pamela tweeted, “I always wonder how I’d look in a wedding dress.”  Pamela then decided to take action by rallying, “Troops for Buns Out on Tuesday,” 29 October 2019, to finally meet Maps who unfortunately was in Japan for the Rugby World Cup at the time.

After Maps’ no-show on the set day, Pamela took to Twitter and posted, “Dear friends and family. This serves as confirmation that myself and Mr Buns are no longer together. He didn’t show up for our wedding.” However, Maps responded to the post by writing, “Rushed off set after seeing a tweet that Mrs Buns was coming by, and now I see that I missed her. Damn, just when mini buns and scones were looking so promising.”

Following his tweet, Pamela forgave him, and the wedding was arranged for Sunday, 3 November 2019. On the day, Maps shared a video of him waiting for his “bride”, who was late for her own wedding but eventually made it. The two shared their nuptials in front of customers at the establishment.

So the wedding finally happened!!! I love this app!
💞❤️💃🏾

This has been the best weekend by far!!! #BecomingMrsBuns#MrAndMrsBuns pic.twitter.com/FBhX7wOZwo

Rushed off set after seeing a tweet that Mrs. Buns was coming by, and now I see that I missed her. Damn, just when mini buns and scones were looking so promising.😔 #BunsOutOfARelationship

UPDATE: After speaking to Mr Buns and our elders I have concluded that KUYANYAMEZELWA EMENDWENI.

You are cordially invited to Mr and Mrs Buns' wedding this Sunday.

I just need to coordinate times with Mr Buns but you're all invited to the Buns wedding @BunsoutL 🤗 https://t.co/MPg8yF5TCP