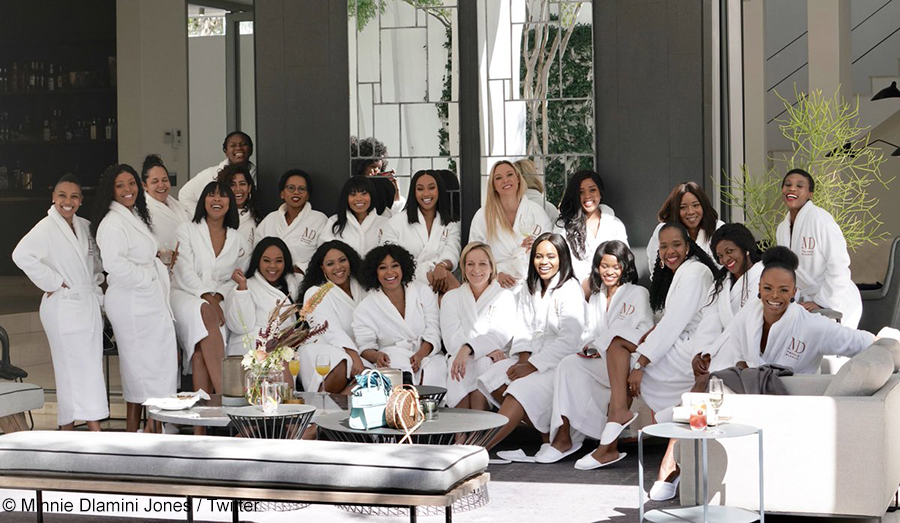 On Saturday, 29 June 2019, media personality and business woman, Minnie Dlamini Jones, revealed that she had hosted the official launch party of her skincare range, MD, earlier in the day. The star shared a group image that featured the women she had invited to the launch dressed in white gowns as they celebrated the media personality’s new business venture.

The intimate launch had a guest list of just over 20 invitees. The star revealed how the ladies made it onto the guestlist, explaining that she invited women she held close to her heart. The star first broke the news of the skincare range, consisting of soaps and body lotions, on Monday, 24 June 2019. The launch also featured popular faces like designer Gert Johan-Coetzee, Top Billing presenter Jade Daniel and veteran media personality, Unathi Nkayi.

Although Minnie only shared images on her social media pages, Unathi Nkayi’s Instagram page provided an insider’s look into the festivities. The former Metro FM radio personality revealed through her social media pages that Minnie’s husband, Quinton Jones, made a brief surprise appearance at the event, and through a video that features the two reminiscing about their first encounter, Minnie also revealed that she intends to release an image that will break the internet sometime this week.

The MD Skincare range is a collaboration with My Body SA and is currently available at all Clicks stores nationwide. After the announcement of the products and their prices, consumers marvelled and complimented Minnie Dlamini Jones at the affordability of her range, which makes it easily accessible for the average South African woman.