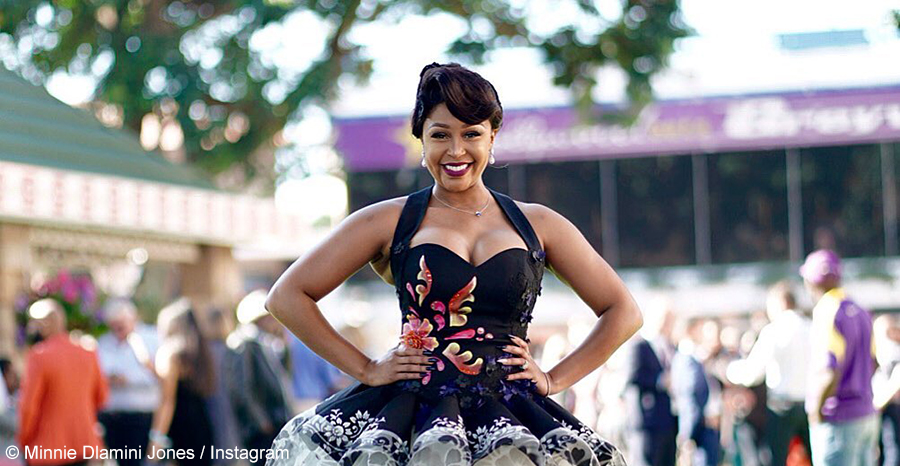 Minenhle Dlamini Jones wore a black and white tutu dress to the Vodacom Durban July which took place on Saturday, 6 July 2019. The dress was designed by Jessica Jane Molebatsi.

South African media personality Minnie Dlamini Jones stood bold with a black and white puffy tutu dress to the Durban July event which took place at the Greyville Racecourse on Saturday, 6 July 2019. Minnie shared the picture on her Instagram page of the black and white dress with flowery embroidery. Her look was finished off with a ‘50s-inspired hairstyle with a curly fringe across her forehead to the side.

The dress was made by designer, Jessica Jane Molebatsi, who shared on her Instagram page how humbling it was for her to design a dress for Minnie Dlamini Jones for the prestigious horse racing event. A list of South African celebrities that Jessica has previously designed dresses for include Boity Thulo’s dress for the South African Film Television Awards, which took place in March 2019. Jessica has also designed outfits for Nomuzi “Moozlie” Mabena and Nomzamo Mbatha.

Minnie’s dress received a nod of approval from some of her industry friends, including Terry Pheto, Basetsana Kumalo, Dineo Ranaka, Lady ‘D’ Khoza and many others. Lira also commented on the post and wrote that Minnie looked “nunus”, an informal term used to describe that one looks cute. Jessica Jane Molebatsi also commented that she felt joy seeing Minnie in the dress she designed for her.

Minnie wrote, in the captioned post, that the stars of Africa were out to play. The caption followed the theme of the horse racing event, “Stars of Africa”.

Below is a selection of images of Minnie Dlamini Jones’s outfit at the 2019 Durban July.

When u dress @minniedlamini for the #vdj2019 😲😲😲😲😲 the EXCITEMENT!!!! Ladies and gentlemen…… There is no way for me to explain how humble and kind this beautiful lady is…… 🖤 Thank you Minnie #jessicajanedesign #DesignerInMe🛍️